Carpenters Workshop Gallery | Paris is pleased to present Supernova, a solo show of new works by the Lebanese design-duo david/nicolas from 6 September to 6 October 2018. For their inaugural exhibition at Carpenters Workshop Gallery, david/nicolas bring two distinct bodies of work that explore different sides of the pair’s multi-faceted practice: Constellation and Monocle, each an interpretation of a post-explosion phenomenon.

‘The death of a star results in either a black hole or a supernova, here, death is only a transformation, it outshines everything else and evolves into a new life. It reminds us of Beirut, this city that was reborn over and over again, a place where time and space are different, where beauty is in the small things or even in the memories of it’ – david/nicolas.

Through a collection of tables, cabinets and rugs, david/nicolas built upon their fascination with time and the universe to create a retro-futuristic ensemble that speaks to the beauty of
regeneration. Selecting inspirational touchstones that range from oriental geometry, to antique furniture, robots, space travel, and the music of Daft Punk – david/nicolas’ retro-futurist aesthetic is continued in their newest series of work through the narrative at the core of Supernova. The show exhibits pieces that chart the transformative nature of the celestial body through materials that evoke concepts of both form and void.

Monocle is a series centered around the representation of large masses of dense matter. Featuring material such wood, marble and bronze juxtaposed against transparent glass, referencing the equilibrium of mass and light in a star.
The Constellation series finds inspiration in the new life of a star and the explosion phenomenon. These pieces revolve around the relativity of perception and how such a phenomenon can be interpreted into palpable matter. Low tables rendered in travertine feature clean lines and undisturbed surfaces that are understood to represent the new beginnings of a celestial body.

The dialogue between past and present, contrasting materials and forms, transformation and regeneration in Supernova is also a reflexion on the designer’s home, an amalgamation of influences with one foot in the Middle East and another in Europe. A city that continuously regenerates and transforms itself. 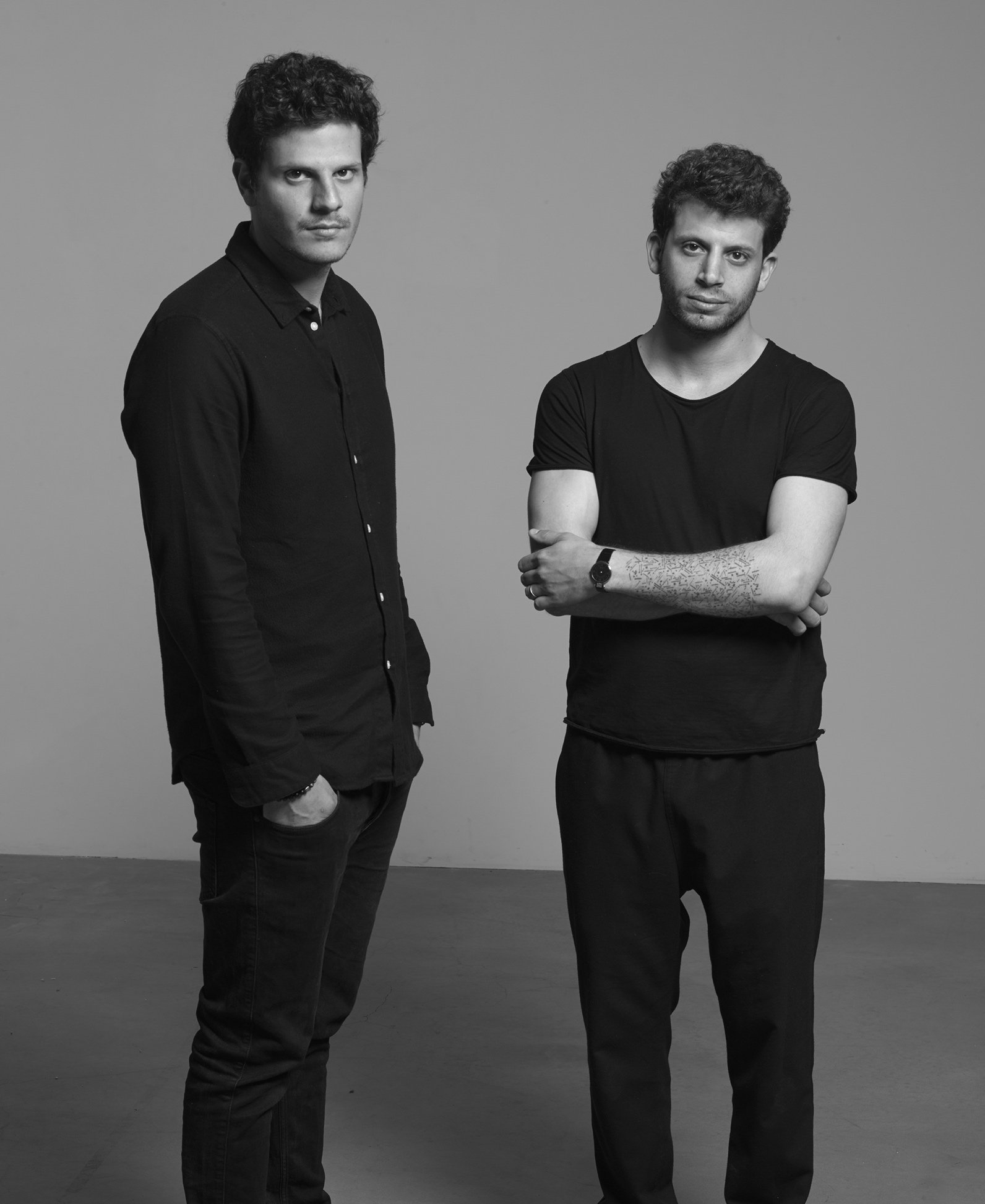 David Raffoul and Nicolas Moussallem have established a global presence since they set up their studio, david/nicolas, in Beirut in 2011. Their innovative approach to contrasting materials, along with their unique way of blending retro, contemporary and futuristic elements, gives their work a timeless aesthetic that translates to a wide range of projects, from furniture design to high-end bespoke interiors.

David and Nicolas met at the Lebanese Academy of Fine Arts, where they both studied for a Bachelor’s degree in Interior Design, going on to undertake Masters degrees at the Scuola Politecnica Di Design in Milan. After graduating, both undertook internships with international design studios, Nicolas going on to freelance for a year in Beirut while David worked as a designer at Fabrica, in Treviso, Italy.

Since 2011, david/nicolas has staged several exhibitions and collaborated with established international brands. The duo’s “retro-futuristic” aesthetic is rooted in a wide range of influences, from Oriental geometry, to antique furniture, to robots, space travel and the music of Daft Punk. The partnership is built on mutual criticism, as much as encouragement. David creates detailed sketches while Nicolas prefers to write down his ideas, and no design is ever completed without both partners’ input. While one is working on a design, the other will often “hack” it, vetoing a particular aspect or suggesting an addition that necessitates a fresh approach.

The duo’s breakout year came in 2014 at the Milan Design Week during which the New York Times selected them as one of the design week’s three breakout stars. Later the same year, they held their first solo show in Beirut, “Loulou/Hoda” at JM Design Gallery, exhibiting pieces inspired by their grandmothers that combined Oriental and Western as well as antique and contemporary influences. Subsequently, the studio introduced its first industrial project at Maison & Objet, the “Orquestra” tableware collection for Vista Alegre, which was awarded the Red Dot Design Award and the Wallpaper* Award.

From local Lebanese newspapers to international magazines, david/nicolas have not come short of making an appearance in their most prominent articles. The duo was selected by Wallpaper* Magazine for their POWER 200 as part of their pick of “20 designers under 40”, they were also highlighted among the 86 designers of the year 2015 by AD magazine in France.

david/nicolas work on multiple types of projects, from collaborations with considerable international brands, to the design of their own pieces, like the “Paume” collection, exhibited at Nilufar Gallery in 2015. Since 2016 they are represented by Carpenters Workshop Gallery, which exhibits their limited edition pieces such as the “Monocle” cabinet. They also work with individual clients on projects that capture their imaginations, whether that means refurbishing a classic car or designing a custom interior for a high-end restaurant. Their near obsessive attention to detail means that they leave nothing to chance – every last aspect of the interior is designed and produced by the studio.